skip to main | skip to sidebar

So, first off, we meet these two guys we've never seen on the show before, hanging out on the island, weaving and fishing. This one, as it turns out, is heretofore-unseen-Island-leader Jacob: 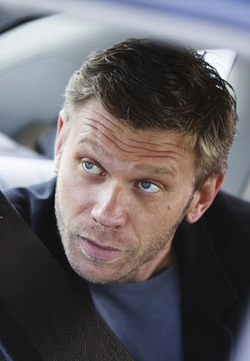 And the other one is... well, we never find out. But he and Jacob are clearly well-acquainted (brothers, perhaps?), and one of the first things we hear out of his mouth is that he intends to kill Jacob. I'm betting good money that this guy's name is Esau.

Next, we finally (finally!) get a glimpse of the statue attached to the four-toed foot that I have, frankly, been a little obsessed with: 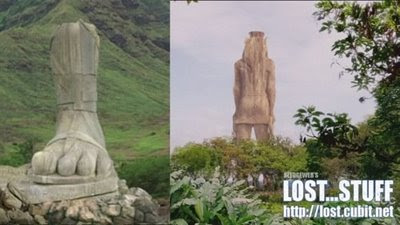 The Egyptian god Anubis! More or less. We don't actually see it head-on, just a profile shot. So there's a possibility it could be, say, Sobek the crocodile god...

But thematically, Anubis -- the jackal-headed god who guards the Underworld, determining who may enter -- makes a whole lot more sense. Lost afficianado Sledgeweb (from whom I took the foot/statue screencap) even makes a convincing case that Anubis had four toes. Also, according to the unofficial wiki Lostpedia, we've actually seen Anubis on the island before... 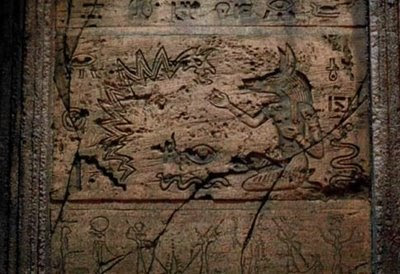 ... battling the Smoke Monster in Temple hieroglyphics. (Update: now that images have been posted, the statue's looking less like a jackal to me. There's a strong argument to be made, as Melinda does in the comments, that the statue is actually Taweret, the pregnant hippo god. And the blog Jezebel is now making a persuasive case for Sobek. See Lostpedia's giant round-up of who's-that-god theories here.)

Moving on. Flashbacks... bomb... flashbacks... In the flashback of Locke being pushed from a high-rise window (the event that paralyzes him), we see Jacob reading Flannery O'Connor's short story collection Everything that Rises Must Converge: Flannery O'Connor was a Southern Catholic writer, known for grotesque, disturbing "morality tales" about the failure of ordinary, well-meaning people to do God's will. She was also a little obsessed with heaven, hell and the apocalypse, which may be why they selected this book for Jacob to read... or maybe it's just that the title ties in with the episode theme.

Later on, in Hurley's flashback, Jacob appears and tells Hurley that his ability to see dead people isn't a curse -- it's a blessing. So Hurley is blessed? By whom, I wonder?

Toward the end of the episode, Ilana asks Richard (whom she calls Ricardus), "What lies in the shadow of the statue?" He reponds in Latin. And thanks, again, to Sledgeweb, we know what he said: "He who will save us all."

That's awfully Messianic of you, Richard. So who's the savior? Locke? Ben? Nameless-probably-Esau-guy-in-Locke's body? I'm gonna go with Locke, who has already been resurrected at least once. Though how he will save them, or what he will save them from, or who "them" is? Couldn't tell you.

So, given the H-bomb, time travel, Egyptian and Biblical mythology, destiny and everything else, the big unanswered question on my mind going into next season seems almost petty: who are Adam and Eve? 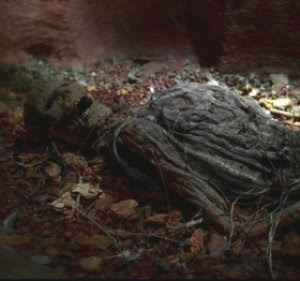 Posted by Gwynne Watkins at 7:23 AM

i still don't think it's Anubis. I think it's Taweret - screenshot looks like hippo head to me...

taweret is the protector of pregnant women...

oh! and I also think that the Smoke Monster is the one possesing Locke. 'cuz we know Smokey can take the form of anyone whose body is on the island (christian shepherd, locke, alex, etc.)

Gwynne Watkins
Gwynne is a Christian, but not the kind that sucks. She lives and writes in New York. Email: commonchristianity(at)gmail[dot]com.